People sometimes ask how I did my research for writing about twins. If I’m with my daughters I gesture towards the brown haired and freckled young women by my side. ‘I’ve been observing these two since they were born,’ I say.

Twenty-two years ago, people stopped to gaze into the double pram I was pushing, murmuring, ‘Little angels!’ They couldn’t know that this was the only time the two tiny babies lying together in the pram actually slept. Night-time was party-time, with lots of screaming. And I was not prepared for how much the naughty-scale would increase when they learnt to walk, which they did in a determined way by 10 months.

I was a new mother, my ‘L’ plates still flapping on my back. I had to learn quickly. My dark-eyed identical girls liked nothing better than conspiring in corners so that they could climb a bookshelf when I was out of the room, sending a precious vase to the floor with a crash. Or escaping down a supermarket aisle to take all their clothes off by the baked beans. They covered the cat’s kittens in felt pen squiggles. When told off, they washed the kittens in soapy water. It was only later that I noticed the mother cat blowing bubbles.

Because they wouldn’t fall asleep in their beds, they often fell asleep in other places. Perhaps copying the cat, one of them once curled up deep inside the dirty laundry basket and slept for hours while I searched the house and garden in desperation. I was just about to phone the police when she woke up yelling because it was ‘all dark.’

When they turned six, it was as if a magic spell had been lifted: they began to read books, sleep through the night, desist from inventing new ways of creating havoc and generally turn into the bright, kind and lovely girls they are today.  Having twins has taught me things about human nature. We long for someone to share our life with, someone who will always understand.  But although my daughters were born with this on tap, and love each other with a fierce loyalty, they are also continually striving for independence and a place in the world that is unique to them as individuals.  Anybody who addresses them as ‘the twins,’ is met with two sets of brown eyes staring hard in best Paddington fashion. They don’t want to be compared. But it is their lot in life. The title of my book is partly an ironic reference to that.

I’m lucky that my girls have shared with me the bitter-sweet nature of having another ‘half’; and although I didn’t base my fictional twins on the real ones, they definitely provided the inspiration for the story. I held my breath while they read The Twins. Luckily, they approved! 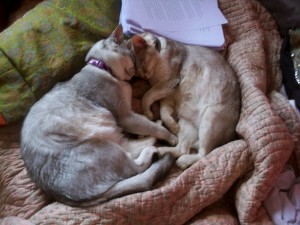 I am not a tidy worker. My desk is usually a mess of sprawling notebooks and bits of paper and unopened envelopes with vital things written on them; a collection of pens, most of which don’t work; hand cream, dictionaries; files full of hard copies of chapters; coffee cups and a large bottle of water that I force myself to drink. I think I was a camel in another life.

I make notes in lots of different notebooks. I have one in every bag, beside the bed, in the car. I panic if I find I’m without one. (Hence the envelopes.) I begin by researching the place and era that I’m setting the novel in, and also jot down ideas to develop my characters. I work out timelines. I begin to sketch out scenes. All of this looks scrappy and disjointed, but the book begins to come together in my head as a feeling, a colour, almost a sense of things remembered from another life.

Then comes the hard part. Putting words onto an empty screen.  I make time-lines and construct a loose plan. I sketch out rough scenes with pen and paper that will build the narrative; then I develop those scenes onto my laptop. I play around with what I’ve got and edit a bit, but if I think I’m going in the right direction I’ll add another chapter as I like getting things down fast.  It’s a strange process. I definitely write from instinct. I try to keep things fluid, feeling my way, so there are times when I realise that I’m going in the wrong direction or don’t need a particular character’s voice and then I lose pages of work.

The world in my imagination gets stronger and more intense as the months go by, the characters stepping off the page and making their own decisions. It’s at this point that I go back and weave in new details, things that have only become apparent to me through the process of writing the story out. It’s very addictive. The last stage, after getting a first draft, is my favourite bit. I get the chance to discuss the book with Emma, my editor, and she gives me her thoughts. It takes me about four months to edit a book and the changes I make at this stage are all-important.

My working day starts after my youngest son has gone to school and I’ve run or walked the dogs around the park. I sit down mid-morning with a cup of coffee and begin. The dogs usually lie around on the floor, and a cat may stroll across my desk – I keep ‘saving’, as a cat on the keyboard has been known to delete paragraphs!  I try and have at least four hours of undisturbed writing time. Towards the end of a book I can work for longer periods, going back to my laptop after doing tea for everyone and writing into the night. Of course, it’s not always as simple as this – life gets in the way. There’s the usual domestic stuff to contend with, and the odd drama or crisis. But without living there are no stories!

As I was writing The Twins, I was aware that it could be seen as an interpretation of a fairy tale, complete with a cottage deep among pine trees and a dark tower without a door. And of course there’s witchcraft and magic woven into the plot, with a ghost dog prowling just out of sight.

There are other similarities too. I like the dark hearts of fairy tales; they don’t shy away from revealing the cruelty in the world. The dying rabbit and ill-fated baby goat are in the book because you encounter such things in the country; but they could also be seen metaphorically as part of the lesson the girls learn about the sacrifices which life demands. Tokens are given in fairy tales and fables – symbols imbued with meaning – like Viola’s pebble, which stands for a love that’s as enduring as the stone itself.

One of the central drives of The Twins is Isolte’s quest to find the lost boys in order to save her sister. The quest is a device used in many fairy tales: Sleeping Beauty and The Seven Ravens to name a couple.  Although the genre takes us into magic places and introduces otherworldly beings, the acts of heroism needed during the quest renew our faith in humanity, leaving us with the knowledge that we have the power to change things through our bravery and love.

Children in fairy tales are typically cut free from adult protection and guidance – think of Babes In The Wood or Red Riding Hood.  They must use their instinct and intelligence to pass tests in order to survive or to achieve their goal. In the twins’ case, this is getting rid of Frank, perceived as the ‘evil’ step-father. Of course, in the novel, it goes horribly wrong and a ‘happy ending’ seems impossible.

Although there are definitely parallels between The Twins and a fairy tale, such stories are populated by characters who (even if they slip into disguise,) tend to be clear representatives of good and evil, whereas I hope that The Twins offers a more realistic look at the way we are all a blend of conflicting qualities, both ‘good’ and ‘bad.’ Ultimately, the characters in my book must strive to find their way back – not out of a literal forest – but out of the dark and tangled past. Their glittering prize isn’t a crown or the hand of the prince, but a chance to forgive and be forgiven.